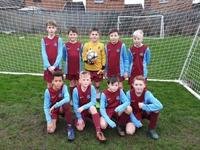 On Thursday, our school football team played Spring Cottage PS in the second round of the Humberside Schools U11 Knock-Out Cup.

Spring Cottage scored twice early on, against the run of play. Constant bombardment of the Spring Cottage goal, for the majority of the first half, should have resulted in several goals, but the ball just didn't find the back of the net.

The second half followed similar lines, with Driffield spending the majority of the time in the Spring Cottage half. With desperation setting in, defender (Josh Walker) scored a fantastic header from a well delivered corner, and then followed it up with a last minute equaliser to take the game into penalties.

Unfortunately, luck ran out with Spring Cottage finishing 4-2 winners on penalties and progressed to the next round.

Many thanks to all the boys who put up a spirited performance and much appreciation to the parents for their support.

We use necessary cookies to make our site work. We'd also like to set optional analytics cookies to help us improve it. We won't set optional cookies unless you enable them. Using this tool will set a cookie on your device to remember your preferences.

Necessary cookies enable core functionality such as security, network management, and accessibility. You may disable these by changing your browser settings, but this may affect how the website functions.