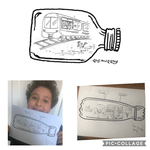 We received this great story and suggestion from Isaac's mum:

Last year during the summer, a cartoonist appeared on GMTV asking for key workers to share their bottle moments for after lockdown to be drawn for free.   I messaged not thinking I’d stand a chance and requested a cartoon of Isaac going on a train to the beach which he desperately missed during the first lockdown. I received a picture which I will happily share with you.

The same cartoonist has now requested children to submit their own bottle moments. Isaac has drawn his bottle moment. He didn’t want to add colour as he wanted to be like the cartoonist which I thought was sweet. We also got a shout out on Twitter.

Is it something the school could maybe encourage to the kids to get involved in? Maybe a half term activity?  I know Isaac really enjoyed doing his as trips on trains, buses and going to the beach are definitely something he’s missed doing during each lockdown, it kind of gave him a boost and gives him something to hopefully look forward too.